Angry fans trashed the concert venue at the North Dakota State Fair after Kid Rock canceled his performance due to inclement weather.

Video shows members of the 18,000-person crowd throwing beer cans and other trash after a sheriff’s department officer announced the cancellation late Friday.

At least one fan tried to storm the stage but was tackled by security. Another unruly concertgoer was led away in handcuffs by police.

Rock, 51, took to Twitter to announce the cancellation, telling fans he was ‘SO P***ED OFF’ he couldn’t perform. The All Summer Long singer also encouraged attendees to ‘be safe’ when leaving the venue and ‘take care of each other.’

The musician, in recent years, has made headlines for his use of homophobic slurs, disdain for COVID-19 mandates and vocal support of former President Donald Trump.

He actually kicked off his current tour with a video introduction from Trump after having promised fans he wouldn’t play any venues that with COVID regulations.

Rock, 51, took to Twitter to announce the cancellation, telling fans he was ‘SO P***ED OFF’ he couldn’t perform

Rock was expected to take the stage  around 9.30pm Friday after a more than two-hour performance by opening act, Night Ranger.

But a storm brewing on the outskirts of Minot, North Dakota kept delaying the show.

A Ward County Sheriff’s Department officer finally took the stage around 11pm to announce the concert was cancelled, resulting in backlash from the crowd.

Fans began to riot, throwing their trash at officials and all over the venue. Concertgoers also loudly expressed their frustrations, inaudibly yelling as the chaos ensued.

Video obtained by TMZ shows lines all police cars surrounded the fairgrounds as the crowd was ushered out. At least one person was arrested. 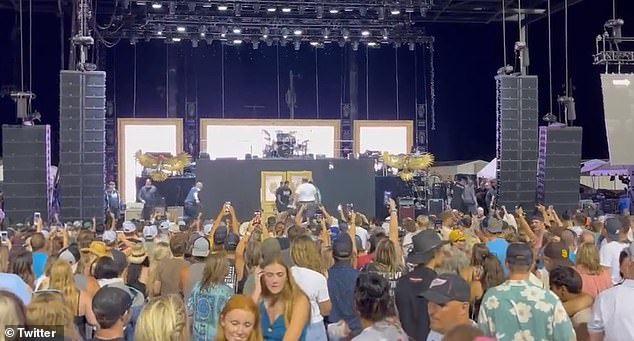 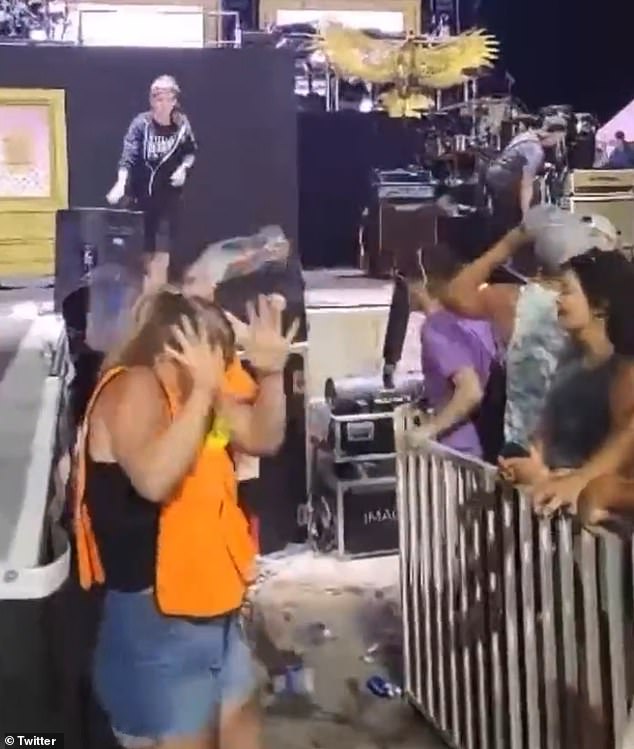 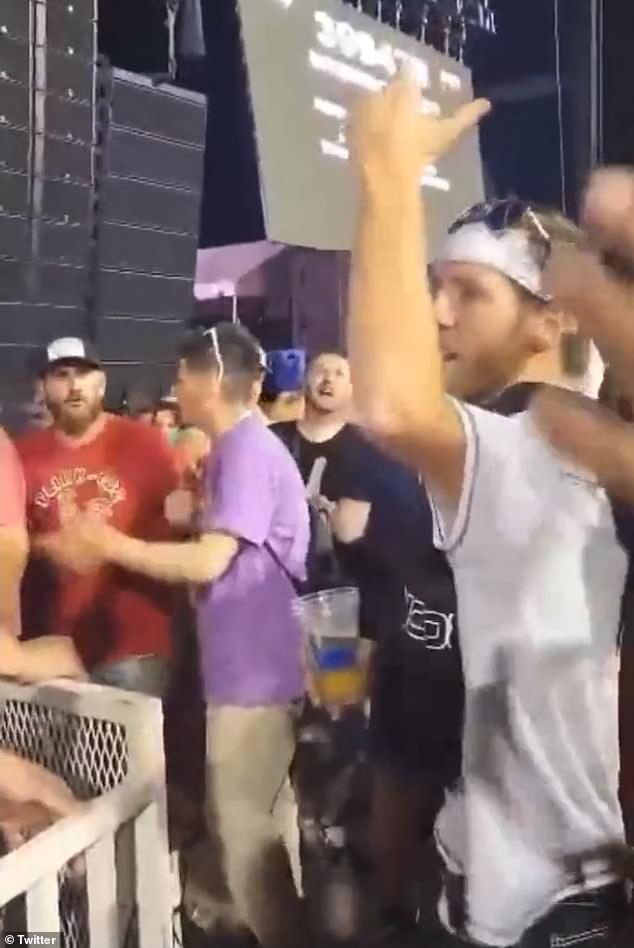 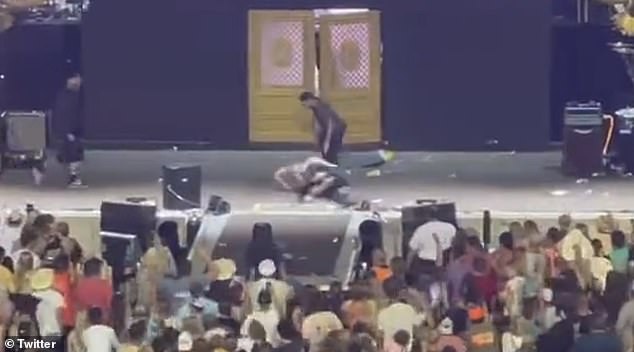 At least one fan tried to storm the stage but was tackled by security. Another unruly concertgoer was led away in handcuffs by police 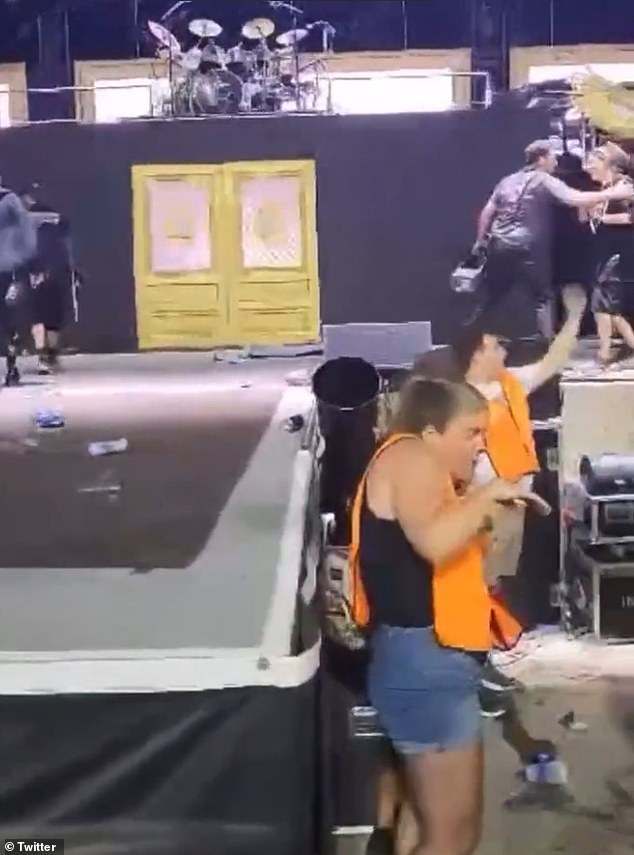 After the cancellation, Rock apologized to his fans online, saying he was upset he ‘could not play for the sold out crowd tonight’

The Bawitdaba singer apologized to his fans online, saying he was upset he ‘could not play for the sold out crowd tonight.’

‘I know it sucks but none of us can control mother nature,’ he said, attributing the cancellation to ‘high winds.’

‘Please be safe leaving and take care of each other.’

The North Dakota State Fair issued a statement on Facebook telling attendees the show was canceled ‘due to safety concerns of the high winds, lightning, and severe weather in the area.’

The venue will be issuing refunds to all ticket holders.

The sheriff’s office, which had been tasked with cancelling the show, also took to social media to clarify the ‘decision to cancel the Kid Rock concert was not made by the Sheriff’s Department.’

‘The Sheriff simply announced the cancellation,’ the department posted. ‘We did not cancel the show.’ 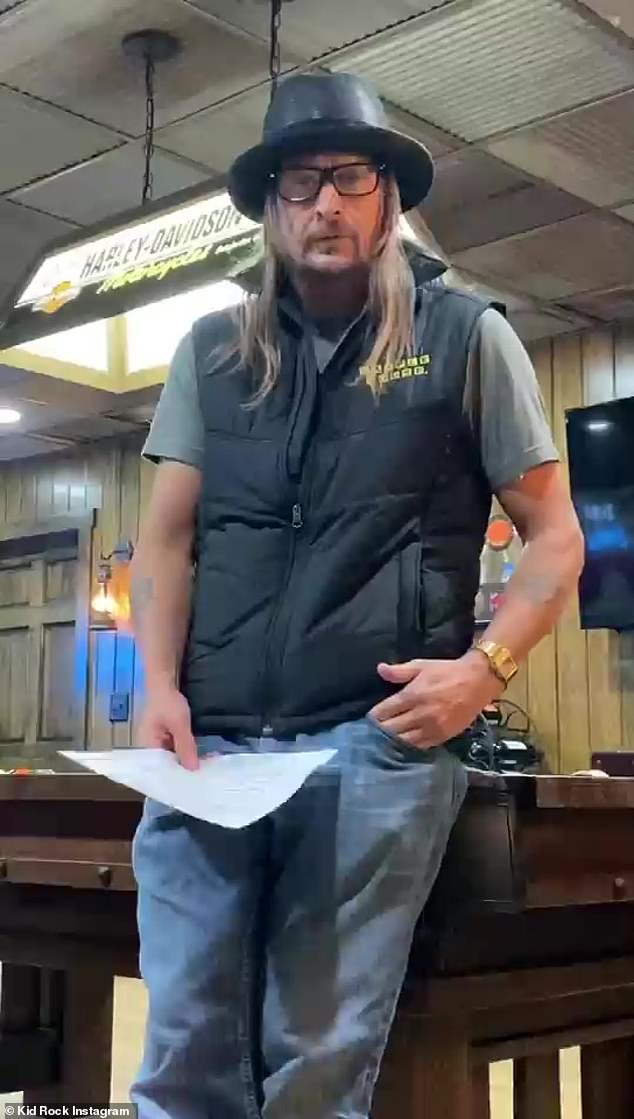 Before the tour kicked off, Rock (pictured during an announcement in January) promised fans he wouldn’t play any venues that with COVID regulations

Rock announced in January, before his 2022 tour kicked off, that he wouldn’t play any venues with mask and vaccine mandates.

In a four-plus minute video, the Picture singer told fans they would be refunded for tickets if the venues still had such COVID-19 mandates by the date of any of his scheduled concerts.

‘There’s been a lot of talk about vaccine mandates and venues. People saying, “I’m not going to that venue because of the vaccine mandate” and this, that, and the other,’ he began in the clip shot seemingly at his home studio.

‘Trust me, we’ve done all our research on this and the consensus says that all this is going to be done, if there are any at these venues, I’m not aware of any, but if there are any, they’re going to be gone by the time we get to your city. If they’re not, trust me, you don’t have to worry. You’ll be getting your money back because I won’t be showing up either.’

The rocker’s trek across the U.S. kicked off on April 6 in Evansville, Indiana. There are shows scattered through until September 17 in Clarkston, Michigan.

At the first tour stop, in Evansville, Rock was introduced by Trump via video.

‘Hello, everyone. I love you all. I know you’re having a great time at the Kid Rock concert tonight,’ Trump said: ‘Quite frankly, he’s amazing. All of you in attendance are truly the backbone of our great country. Hard-working, God-fearing rock-and-roll patriots.’

‘Bob is truly one of the greatest entertainers of our time,’ the ex-president said, referring to Rock by his real name, Robert James Ritchie.

‘Not the best golfer by any means, his golf game could use a little work, but a great, great entertainer, and that’s why you’re there.’

‘Let’s all continue to love one another, fight for our God-given freedoms, and most of all, let’s make America rock again. Make America Rock Again.’ 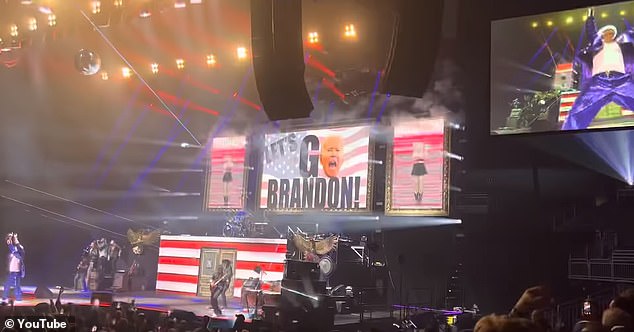 Rock kicked off his nationwide tour on April 6 in Evansville, Indiana (pictured). There are shows scattered through until September 17 in Clarkston, Michigan 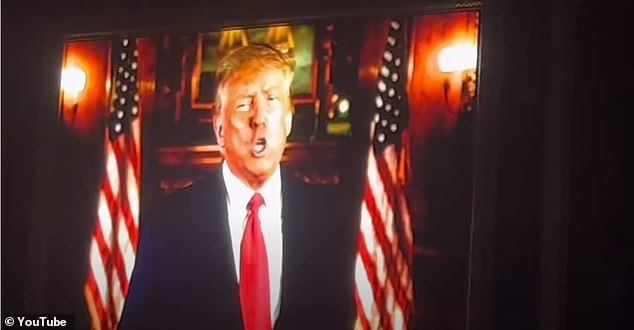 At the first tour stop, in Evansville, Rock was introduced via video (pictured) by former President Donald Trump. He told the crowd: ‘I know you’re having a great time at the Kid Rock concert tonight,’ before concluding with ‘let’s make America rock again’

Rock has been incredibly vocal about his support for Trump and has even publicly discussed their alleged relationship.

Last March, the singer claimed Trump asked him for an assist when writing a tweet about ISIS, probed the crooner on how he would handle North Korea and showed him maps in the Oval Office.

‘I make dirty records sometimes. What the f**k am I doing here?’ Kid Rock said of the pinch-me moments with the former commander-in-chief during an interview that aired March 21 with Fox News Channel’s Tucker Carlson.

Rock, who rolled up to the interview with Carlson in a ‘Let’s Go Brandon’-branded Rolls Royce, told the primetime host that he met Trump in 2017 when the then-president asked former Alaska Gov. Sarah Palin to ‘bring some interesting people’ to dinner.

‘She called me and Ted, Ted Nugent, and I was like, hell yes. Ended up there. We end up becoming buddies and spend a lot of time on the golf course now,’ Kid Rock explained.

‘And it’s really weird – get phone calls from him and stuff. It’s just kind of mind-blowing,’ the country star added. 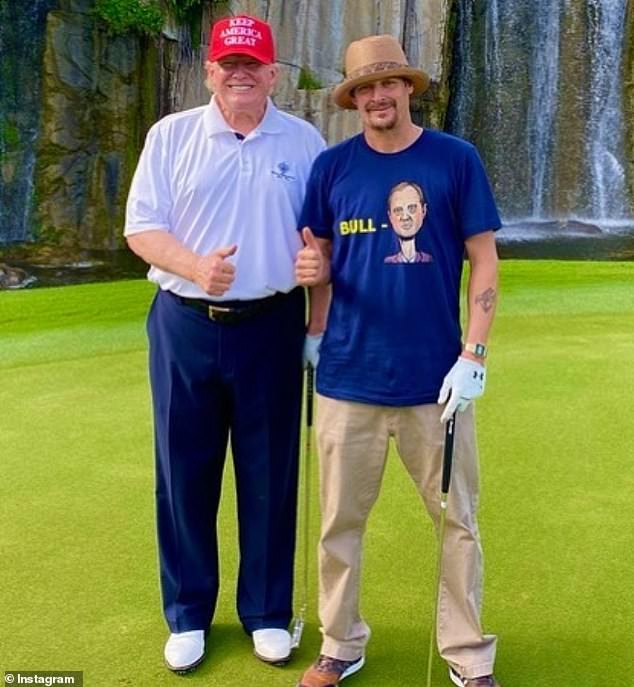 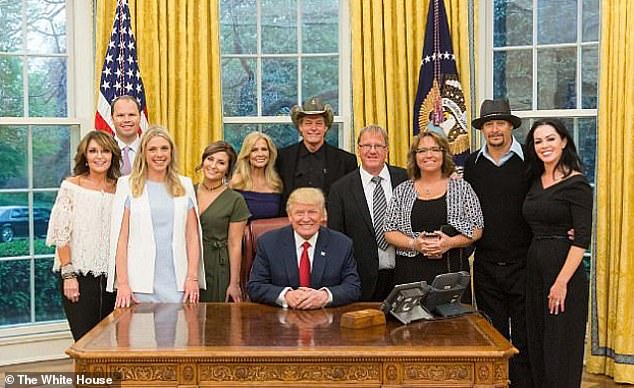 Trump (center) met Kid Rock (second from right) when former Alaska Gov. Sarah Palin (left) invited him to a 2017 White House dinner with the then president 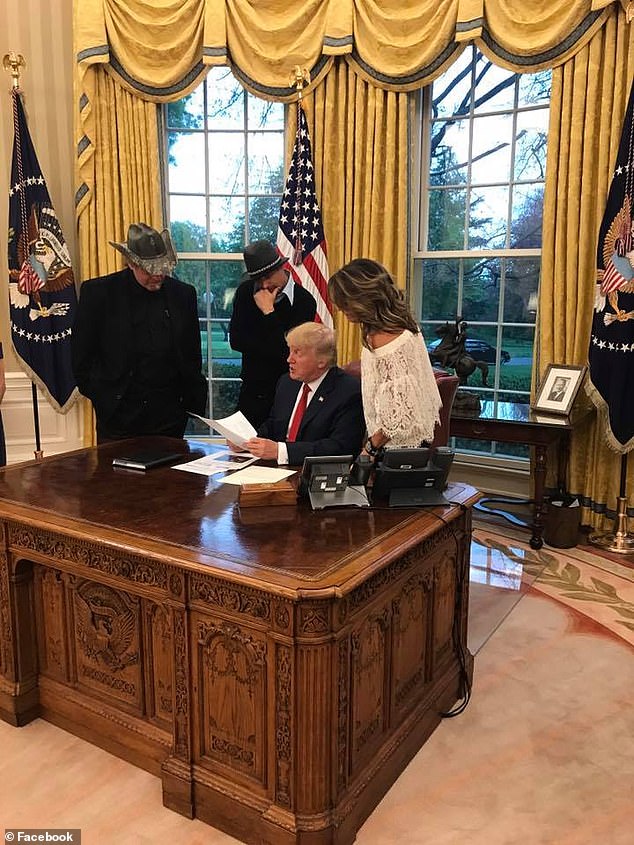 (from left) Ted Nugent, Kid Rock and Palin gather around Trump in the Oval Office during a 2017 visit to the White House

Rock recalled one session with Trump when the now ex-president ‘ended the caliphate,’ a reference to the Islamic State terror group that took over parts of Iraq.

‘He wanted to put out a tweet. And it was like – I don’t like to speak out of school, I hope I’m not – but he said something like … and I’m paraphrasing – but it was like, “If you ever joined the caliphate, and trying to do this, you’re going to be dead,”‘ the rocker recalled.

Trump asked Rock his thoughts on the tweet, the performer alleged.

Rock said when the actual tweet came out it was ‘reworded and more political and like a little politically correct.’

He also said he and Trump would be ‘looking at maps and s**t.’

‘What do you think we should do about North Korea?’ Rock also said he was asked. ‘I’m like, what? I don’t think I’m qualified to answer this.’

There have been a number of questions raised about Trump’s handling of classified documents and materials during his time in office – and even after – as the National Archives claimed earlier this year that he took classified materials with him to Mar-a-Lago after leaving office.