Longtime Sarge fave and market cap heavyweight Microsoft (MSFT) reports on Tuesday evening. The stock, like most of its mega-cap siblings, has not had a good nine months or so. Still, it hangs in there, trading at 27x forward earnings, which sounds expensive in late July 2022 because, after all, this is Microsoft and Satya Nadella runs the place.

Under the leadership of Satya Nadella, Microsoft has been better run than it ever has been before, regularly beating expectations and growing both sales and operating income across its three main business segments, namely Productivity and Business Processes, Intelligent Cloud, and More Personal Computing.

This quarter should be tougher, though. Currency exchange rates have not been friendly and costs have been rising. Sure, the cloud is still doing well, led by Azure. That said, personal computers aren’t moving like they used to and the future of capex on a broad economic level across Microsoft’s base of clients, if anything going forward, has become unknown.

For Microsoft’s fiscal fourth (June) quarter, consensus view is for earnings per share of $2.30 within a range spanning from $2.25 to $2.35. This would be compared to EPS of $2.17 for the year-ago period. These earnings would come on revenue of $52.4 billion within a range of $51.8 billion to $53 billion. Microsoft drove sales of $46.15 billion for this quarter last year. At consensus, this quarter would be good for earnings growth of 6% on revenue growth of 13.5%.

As far as Wall Street is concerned, that $2.30 consensus is the result of a swath of downward revisions to that number. The aggregate projections had been for $2.35 at the start of the quarter but drifted a nickel lower as 23 of the 29 analysts that I can find had shaved their expectations by a few pennies a piece.

That said, the most recent mentions made by Wall Street have been generally optimistic. Last Thursday, Dan Ives of Wedbush maintained his “buy” rating and $340 target price on Microsoft as Keith Weiss of Morgan Stanley maintained his “overweight” rating. Weis, who has a $354 target price on the stock, believes that “a longer-term teens total return profile and an attractive valuation” make the stock a top pick in this environment. Last aFriday. Cowen’s Derrick Wood maintained an “outperform” rating and $330 target. Ives, Weiss. and Wood all have one thing in common. They are all not just rated at five stars by TipRanks, but all three are rated in the top 4% of the almost 8,000 analysts tracked by TipRanks.

What to Look for

If consumer weakness is to be an issue, it will turn up in the More Personal Computing segment. The group grew sales slower than Microsoft as a whole for the March quarter. A further slowing, coupled with currency-related headaches, will put more pressure on the cloud businesses to produce, and they just might.

In addition, perhaps we will hear an update on the proposed Activision Blizzard ATVI acquisition. Moffett Nathanson analyst Clay Griffin (3 stars) upgraded (ATVI) to “outperform” on Monday (this) morning, citing the gap between ATVI’s last sale and Microsoft’s proposed $95 cash takeout price as Griffin sees “strong rationale” for this deal to go through.

Beyond that, we need to watch the fundamentals. Understand that Microsoft is a smooth-running machine, producing $2.68 per share for the fiscal third quarter in free cash flow while compiling a net cash position of $104.66 billion, which dwarfed the company’s long-term debt load of $48.171 billion. In addition, Microsoft ended that quarter with a current ratio of 1.99, a quick ratio of 1.94 and a tangible book value of $11.25 per share.

Microsoft gave up 1.69% last Friday to close up 1.46% for the past week and up 7.8% from the June low. MSFT is down 22.6% year to date and down about 25.5% from the November high. So, the stock is a dog? It has been, but I think we know better than that. At least I hope so. I am still long the name, but I am a lot less than I was earlier in the year as my core set of disciplines required that I apply some risk management on the way down. Do I start buying the shares back that I had sold? Is now the time to get MSFT back up to a full exposure?

I have really focused much more on the semiconductors than I have software. That has worked well. That group breathed a bit of life into my portfolio. My only remaining exposure to software is this stock, some Salesforce (CRM) and some ServiceNow (NOW) that I grabbed on the Bill McDermott “Mad Money” gaffe a few weeks back. That turned out to be a home run, but it was just a trade, and I have already started to draw that position down. I kind of need more software for a better-balanced portfolio and I trust Nadella maybe as much as any of them.

It’s interesting that MSFT in June rebounded at a precise 50% retracement of the April 2020 through November 2021 rally. 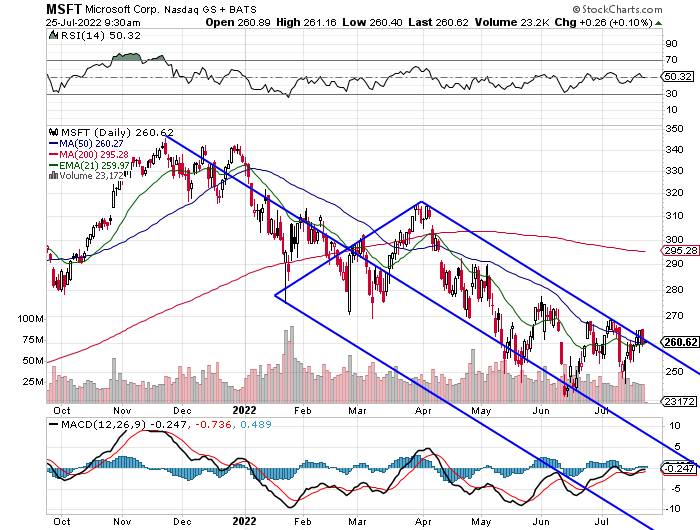 Where the stock is now is akin to standing in the middle of a busy street wearing a blindfold. It appears that the last sale of MSFT, the 21-day exponential moving average (EMA), the 50-day simple moving average (SMA) and the upper trend line of our Pitchfork model all occupy the same ground. A move higher will almost certainly be reinforced technically, providing support. However, failure will also be technically reinforced.

My thinking is that I probably want to beef up my bullish stance from the diminished core position from where I now stand. That said, I am not brave enough to go out and add equity one day prior to earnings. I think I am going to add a bull call spread to my core equity stake.

(MSFT is a holding in the Action Alerts PLUS member club . Want to be alerted before AAP buys or sells COST? Learn more now. )

Get an email alert each time I write an article for Real Money. Click the “+Follow” next to my byline to this article.