The A-List actor, 58, bought the 1918 century old house in celebrity haven Carmel, in what is believed to be the highest priced property ever to be sold in the area.

Locals are reportedly thrilled to have another big-name celebrity in their midst, especially after the iconic property has sat empty for years.

Pitt is reportedly a big fan of Craftsman-style homes, which could be why he has purchased his latest bachelor pad – where he could be joined by his brood of six children with ex-Angelina Jolie.

He was recently seen having a blast with his 22-year-old cast mate Joey King as they promoted their new action movie Bullet Train.

Brad split from Jolie in 2016, and has been linked with a string of beauties ever since, including Lykke Li, 35, who lives about three minutes away from Pitt in Los Angeles.

He designed the property on a piece of land owned by infamous author Daniel Lewis James, who wrote ‘Famous All Over Town’, naming the property on the Carmel highlands after him.

It has been owned by Searock since 1999, a limited liability company tied to the late Chicago financier Joe Ritchie and his wife, Sharon Ritchie. 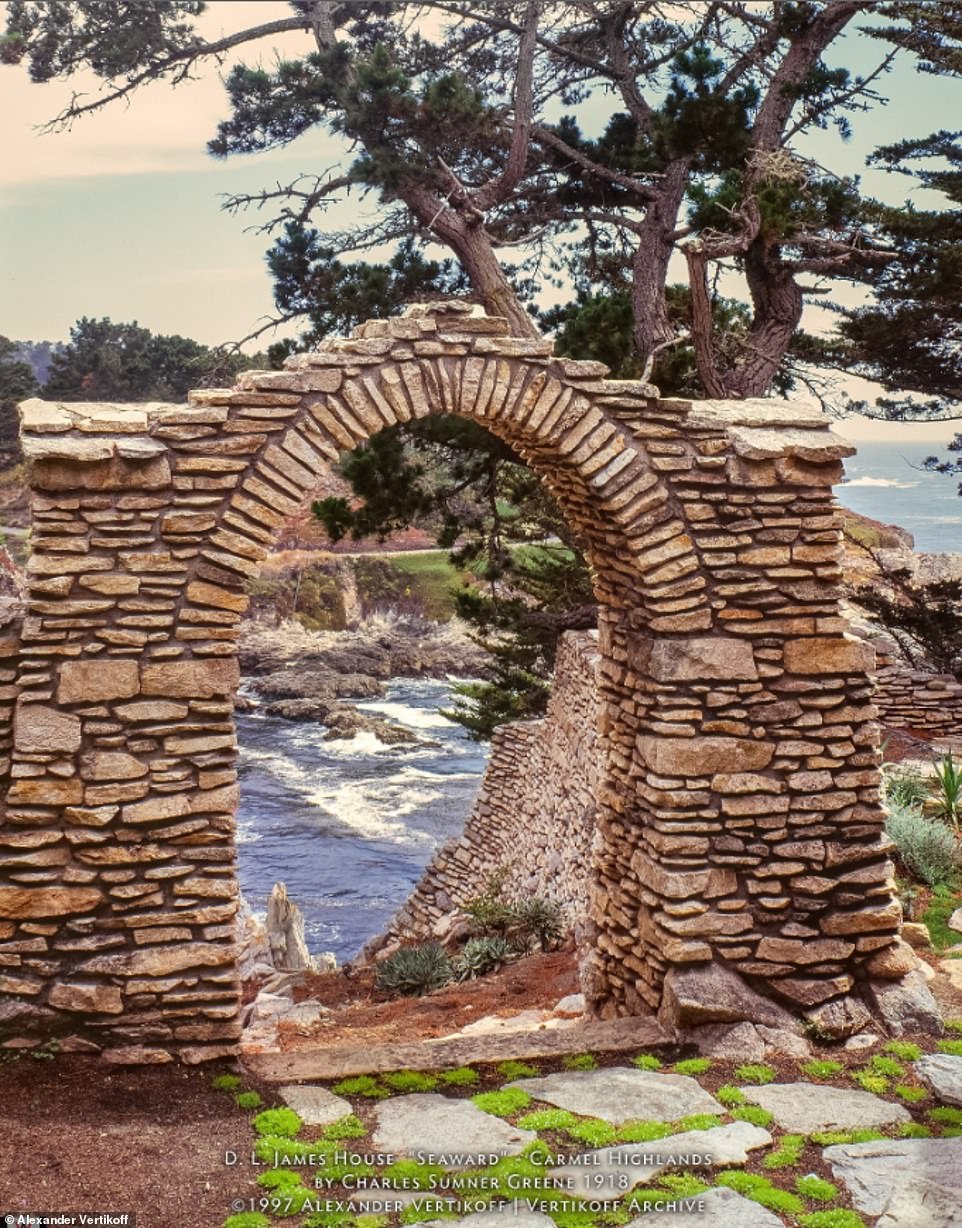 The property is a stones throw from the stunning California coast, with Mr Greene hand picking a large amount of the stones that were used in his project 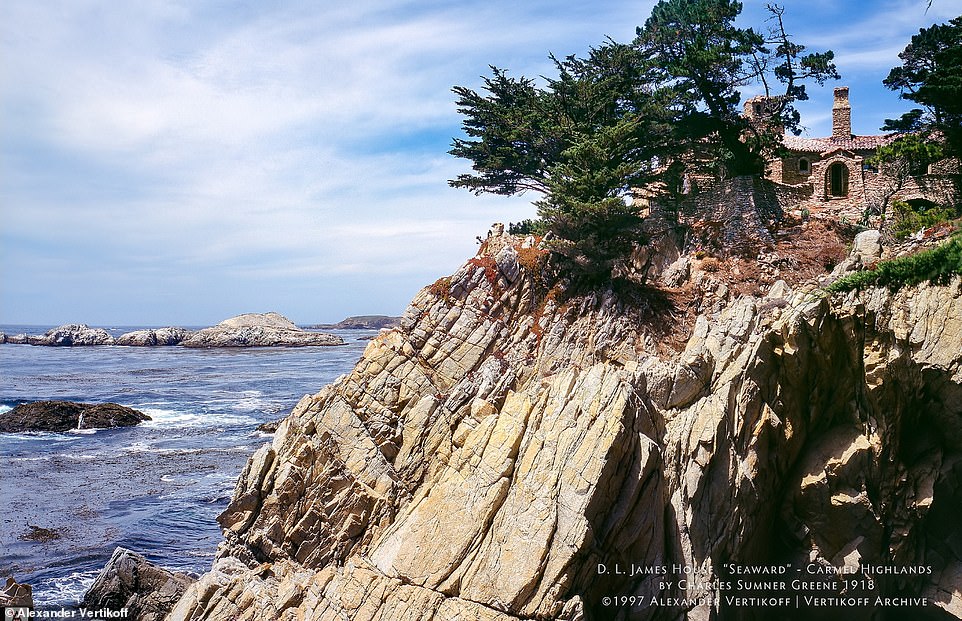 It is mere meters away from the coast, with the design intended to keep the property in keeping with the rocks as though it were part of the coastline 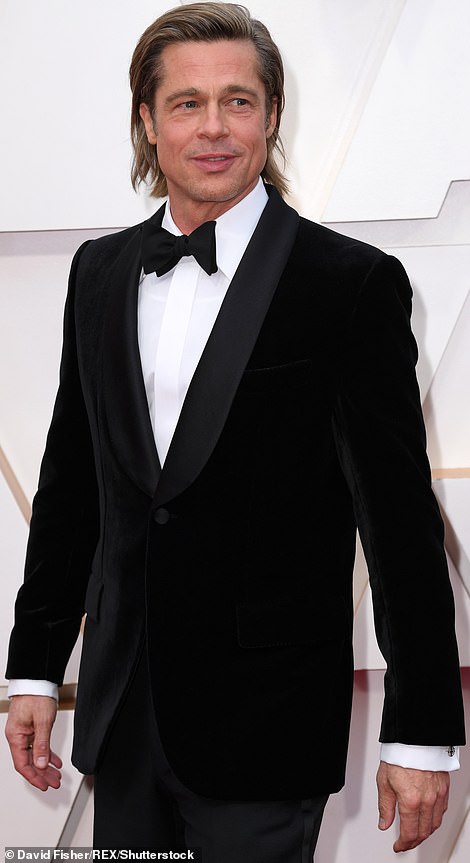 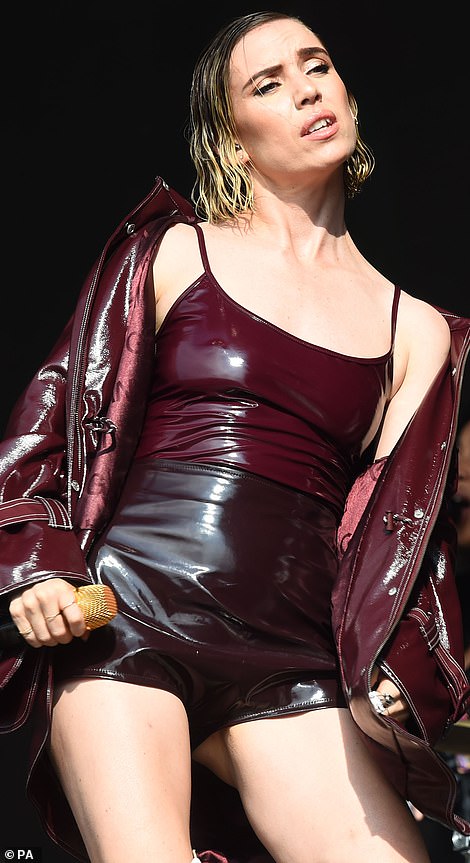 There were unconfirmed rumors that Pitt was dating singer Lykke Li earlier this year,  though multiple outlets quoted sources saying the two were just friends 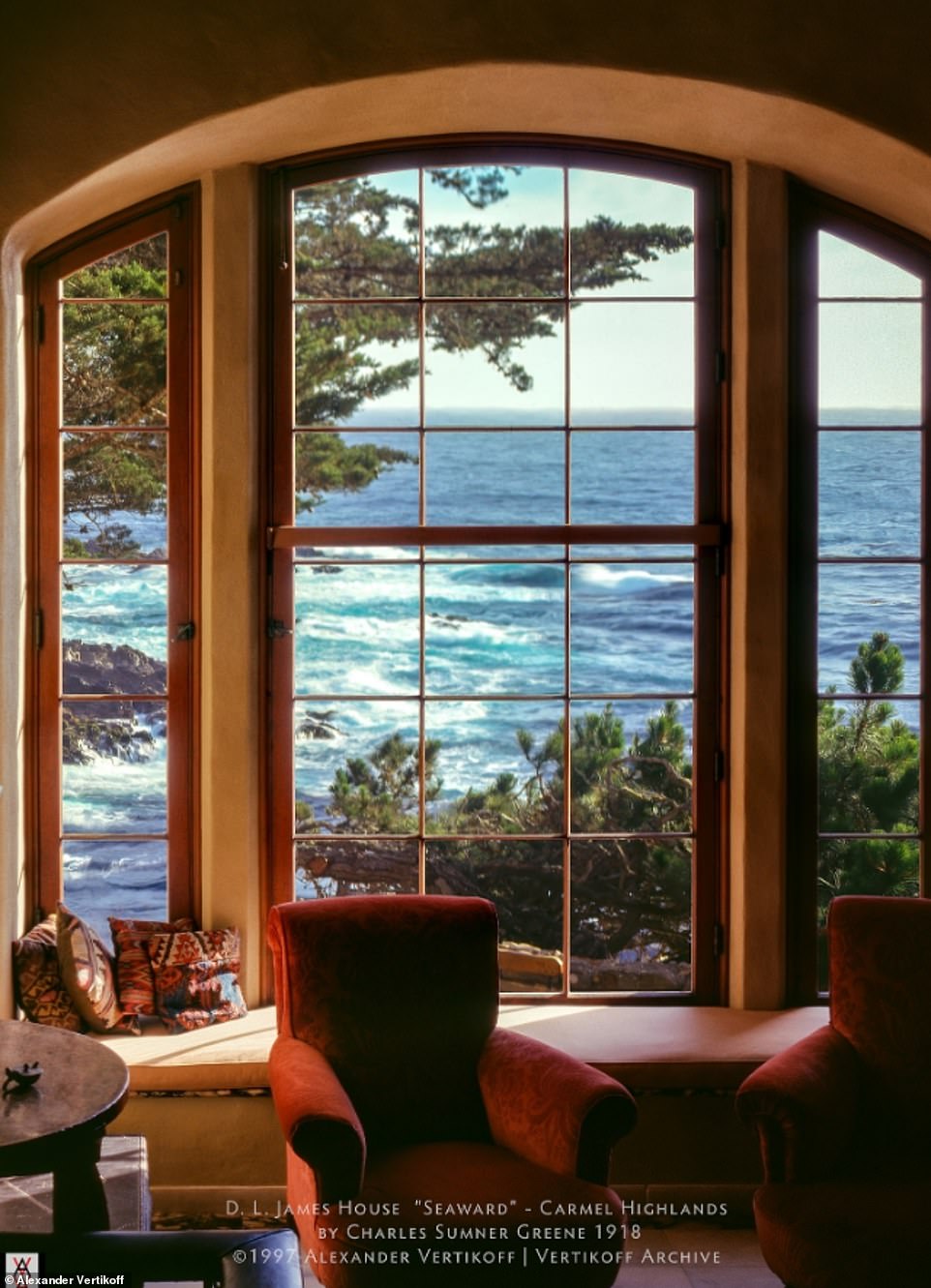 Inside the property is littered with eclectic furniture when it was pictured in 1997, and has a huge bay window with a view of the sea and trees 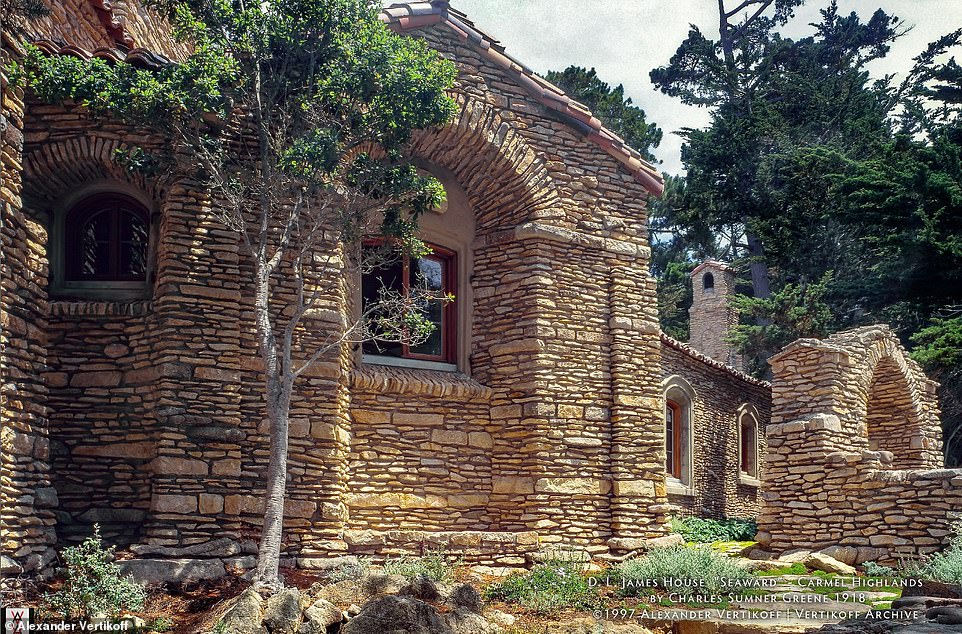 The intricate brickwork on the outer part of the property was painstakingly designed by the architect, who wanted it to be a part of the rocky coastline 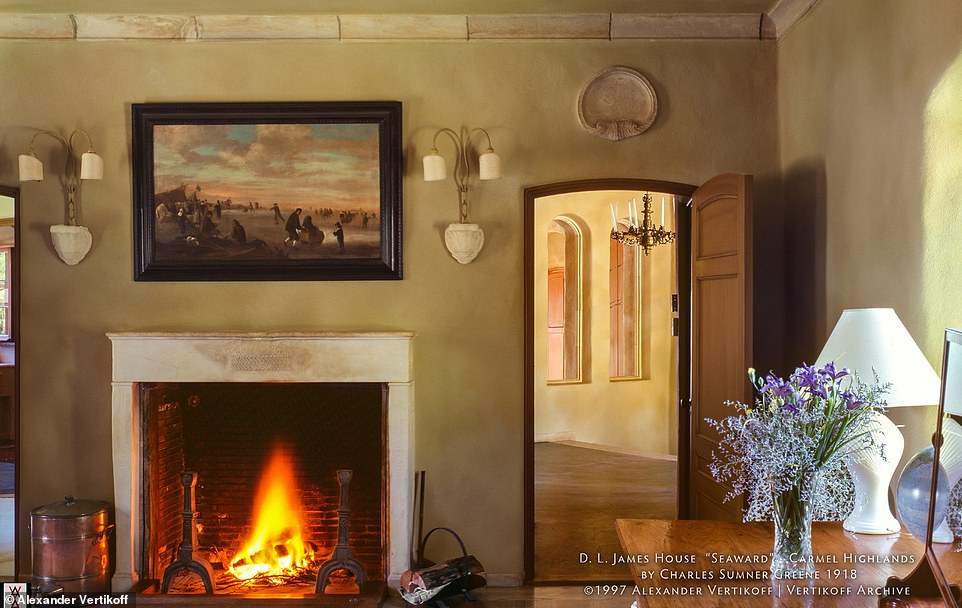 A roaring fire was lit in the open planned home, with rustic fittings and light wood doors adorning the inside. Artwork and a chandelier were hung on the walls and ceilings with a floral arrangement decorating the inside of the property

Records show that Mr Ritchie died earlier this year, and the property was never publicly listed for sale.

The luxury property, which is just meters from the beach, boasts a ‘wooden aesthetic’ and is built from locally quarried sandstone and granite.

It has arched windows, with bricks ‘individually chosen’ by Charles Greene, and a tiled Mediterranean-style roof.

The Gamble House, an organization dedicated to the work of Greene and Green, the firm put together by Mr Greene and his brother Henry, say that the property is unlike the siblings’ homes in Pasadena. 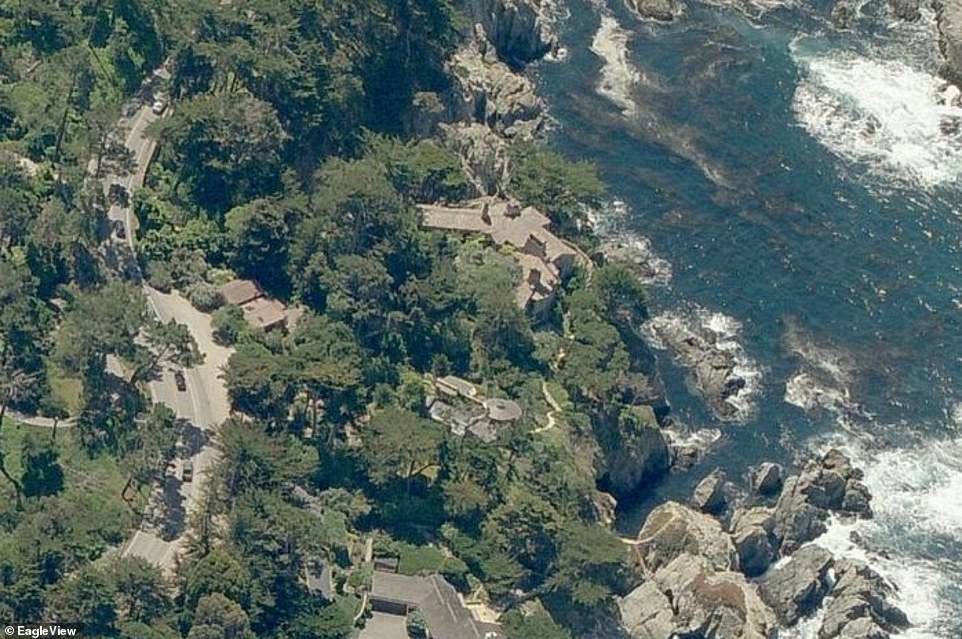 Aerial images of the property show just how close it is to the coast line, ensuring total privacy for Mr Pitt when he visits the property 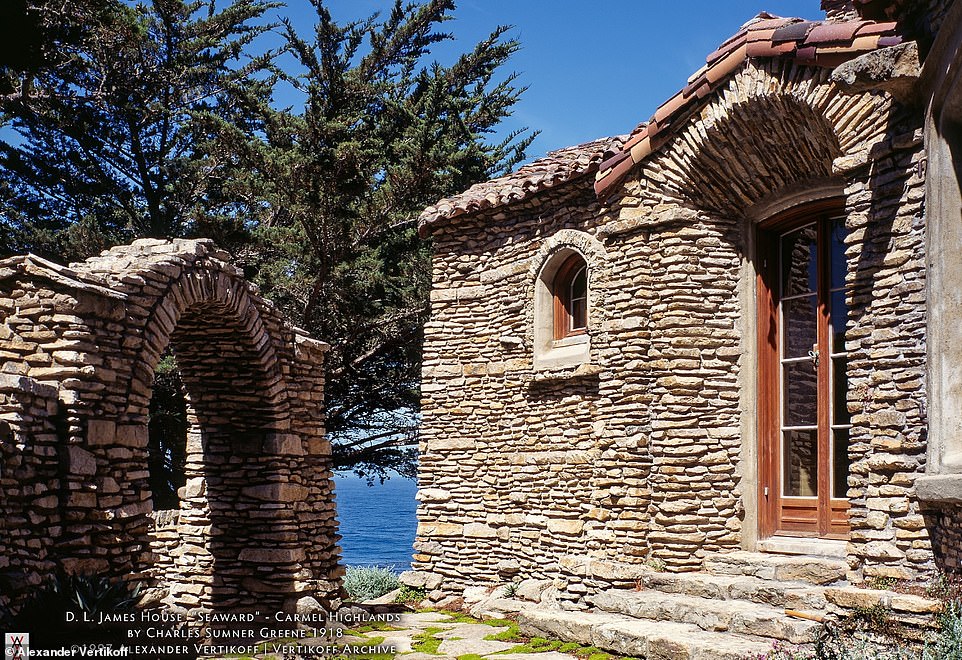 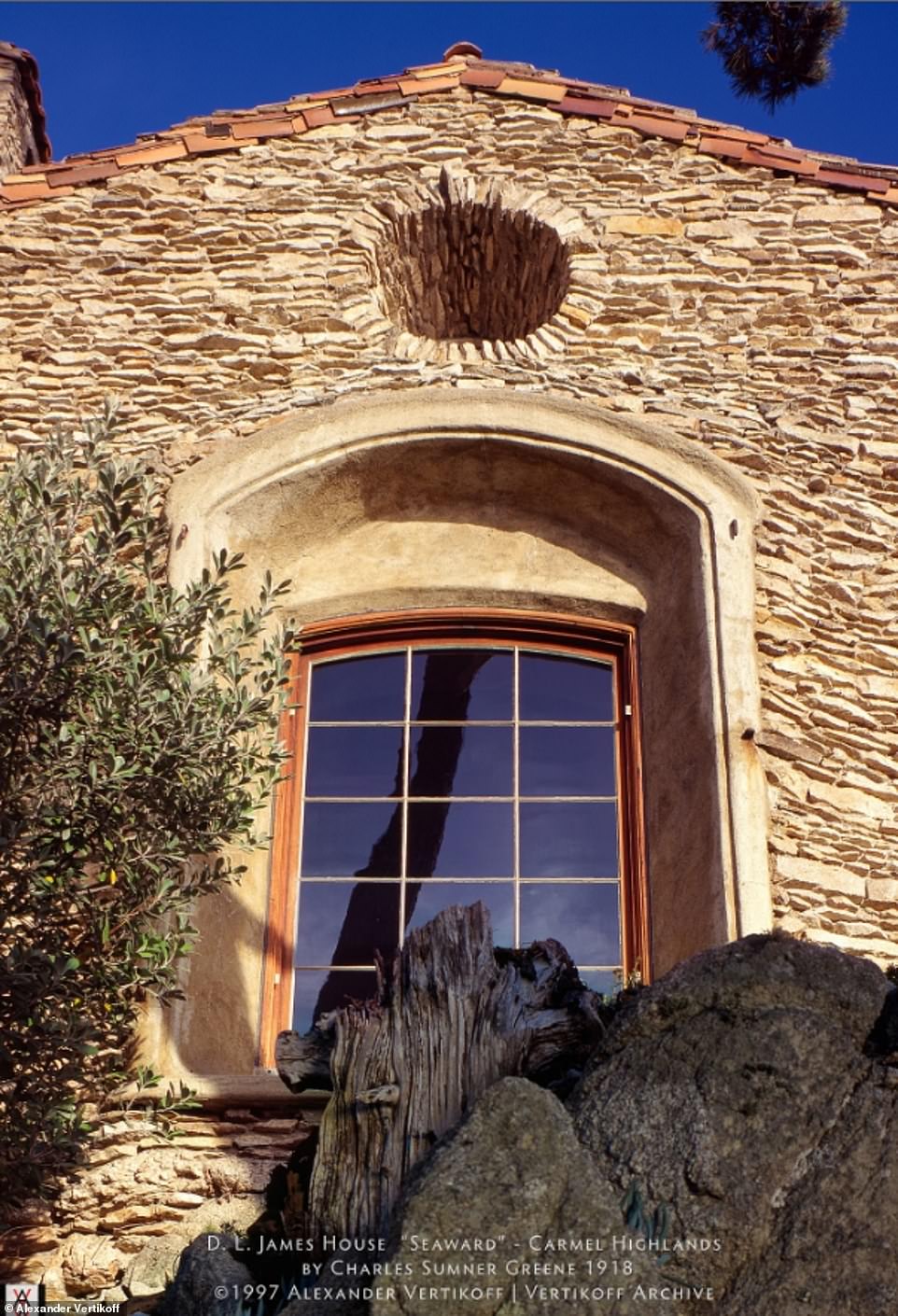 Charles Sumner Green designed the property so it would not interfere with the nature on the plot of land, with trees and shrubs growing around the property since it was first built 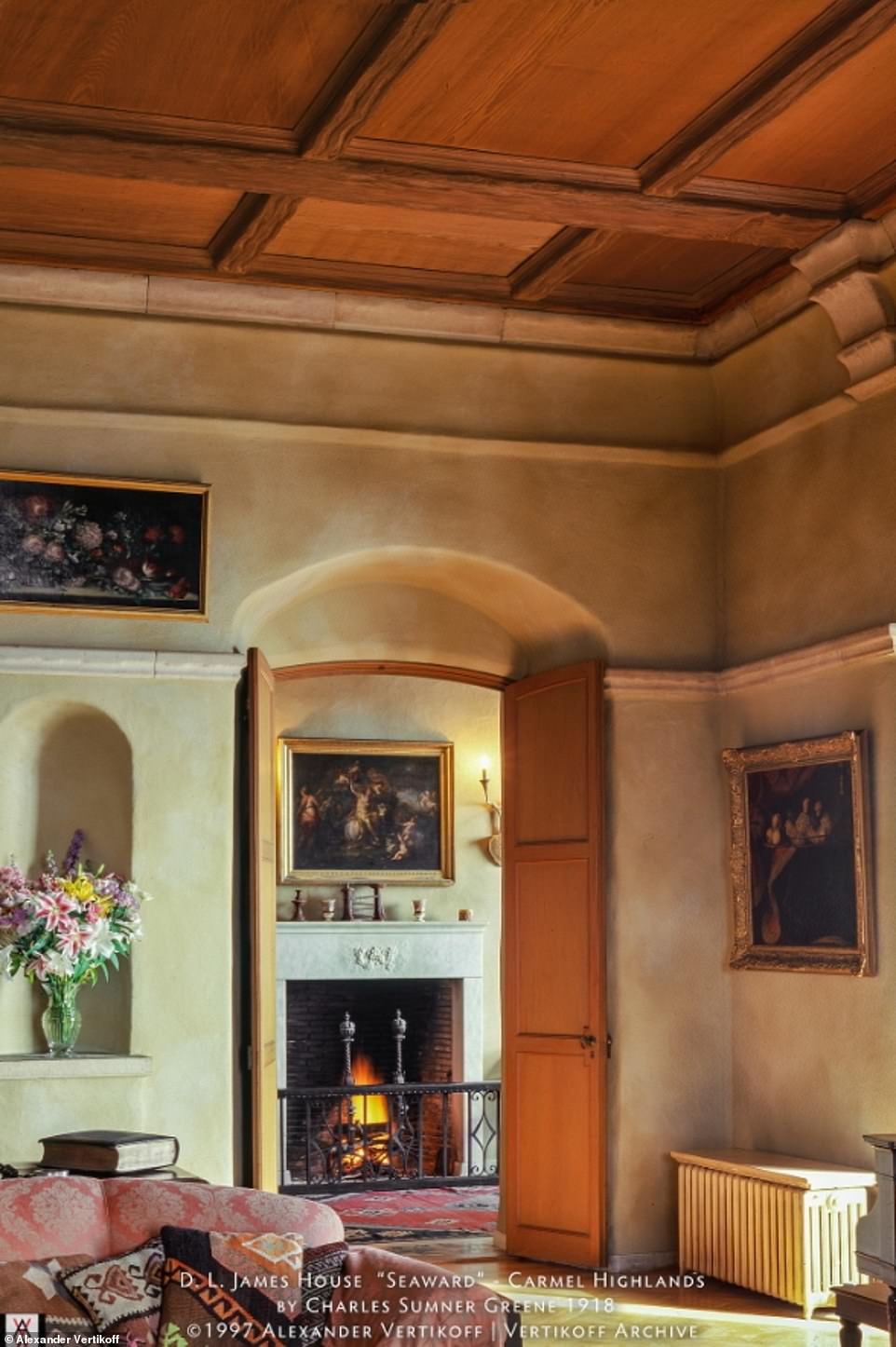 The lightly furnished interior could be set to change under the new ownership of the Hollywood star, though he reportedly enjoys the ‘Craftsman style’ of the stunning property 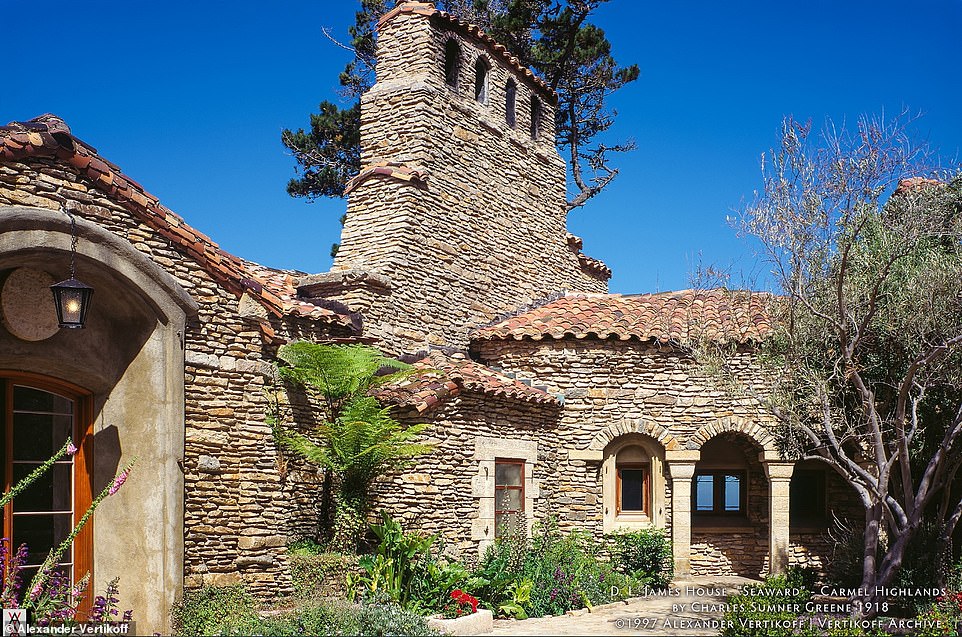 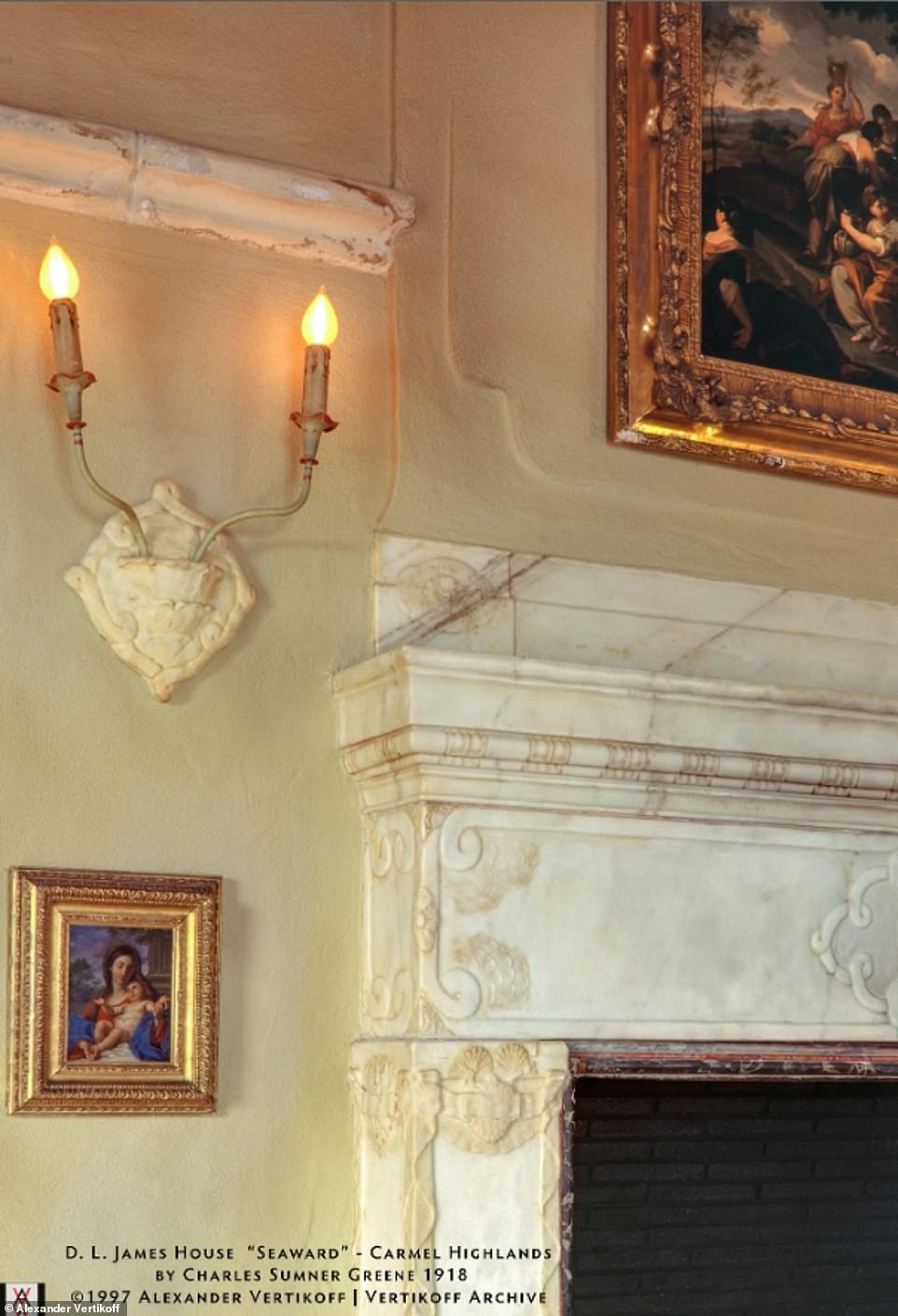 Marble fireplaces are also part of the intricate interior of the property, which is adorned with various pieces of art throughout 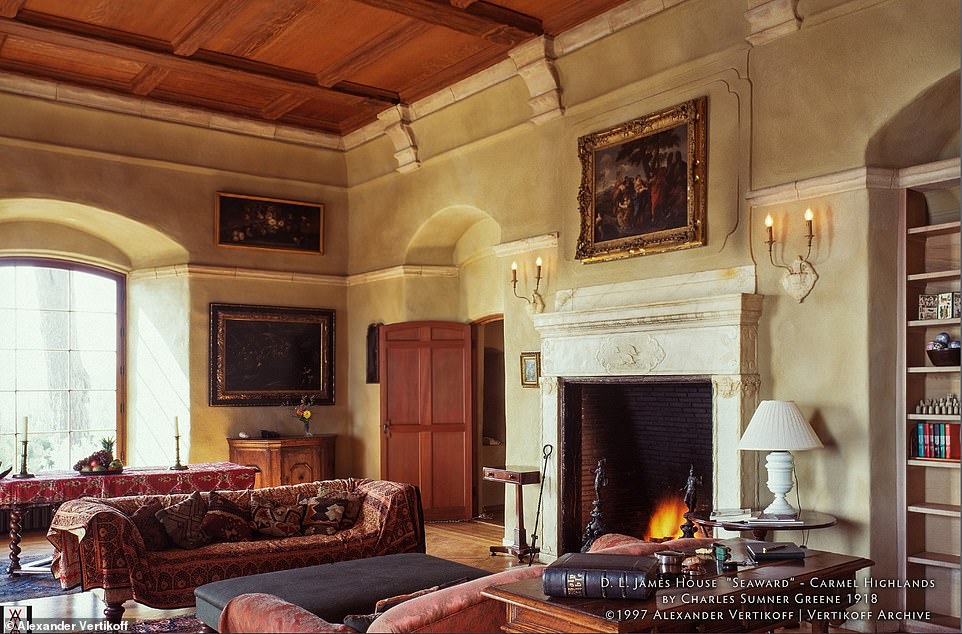 Empty bookshelves and sofas are scattered close to the luxury fireplace, with a dining table seen in the background close to the massive windows 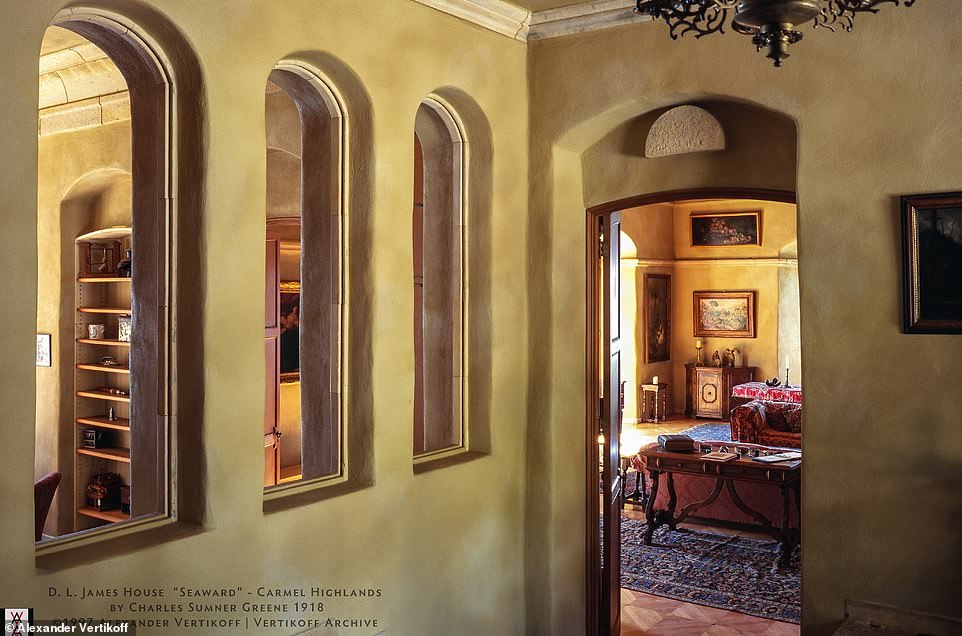 Long mirrors were built into the walls of the property, with the door’s set into a much larger structure in the rock 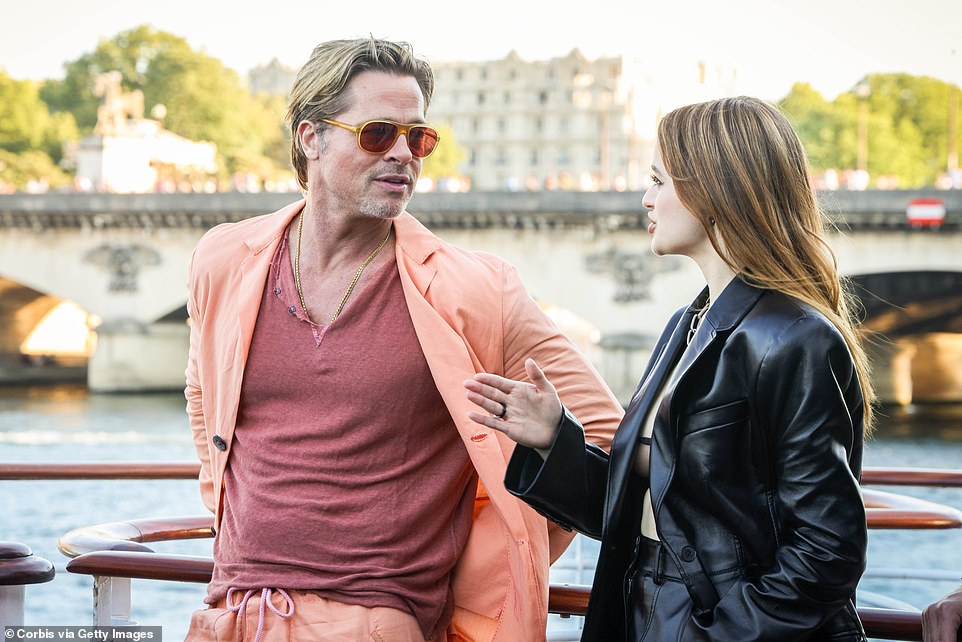 Clint Eastwood, 92, became the town’s mayor in a landslide election in 1986, with the iconic actor still residing in the area.

Golden Girls actress Betty White also lived in the paradise in her $10.775m home until her death earlier this year.

Legendary singer Doris Day, resided in Carmel until her death in 2019, in her yellow home which sits above Quail Golf Club’s 18th green.

She also purchased the iconic Cypress Inn and declared it as a ‘dog friendly’ hotel in the 1980s.

Academy Award winner Joan Fontaine lived in the Highlands for the majority of her life in her beautiful Villa Fontana.

According to the organization’s website, as part of the design Mr. Greene ‘built up the outer walls so that they appear to be growing out of the cliffs.’

Photographer Alexander Vertikoff snapped the exclusive pictures of the property in 1997.

He told DailyMail.com: ‘When I photographed it the whole thing had been uninhabited for quite some time.

‘It has been in a perpetual state of being finished for 50 years, it was difficult to tell what all of the rooms are.

‘It’s not that big, and it’s awfully private. They just don’t make land like that anymore.

‘Some of the views from the property most likely don’t exist anymore, the grass and greenery would have all grown and you wouldn’t be able to see the side of the house.

‘You can’t just walk in there. It’s pretty amazing.’

The actor already has a $5million beach house in Goleta, California, which he purchased in 2000 when he married Jennifer Aniston.

Last year the property was dangerously close to the Alisal wildfire and has been included in the evacuation warning zone, meaning it is at significant risk from the fire.

But the actor may not have escaped the wildfires with his new property, after hundreds of residents were evacuated from the area near Big Sur earlier this year.

Carmel-by-the-Sea first became popular with the Hollywood elite when Clint Eastwood, 92, became the town’s mayor in a landslide election in 1986, with the iconic actor still residing in the area. 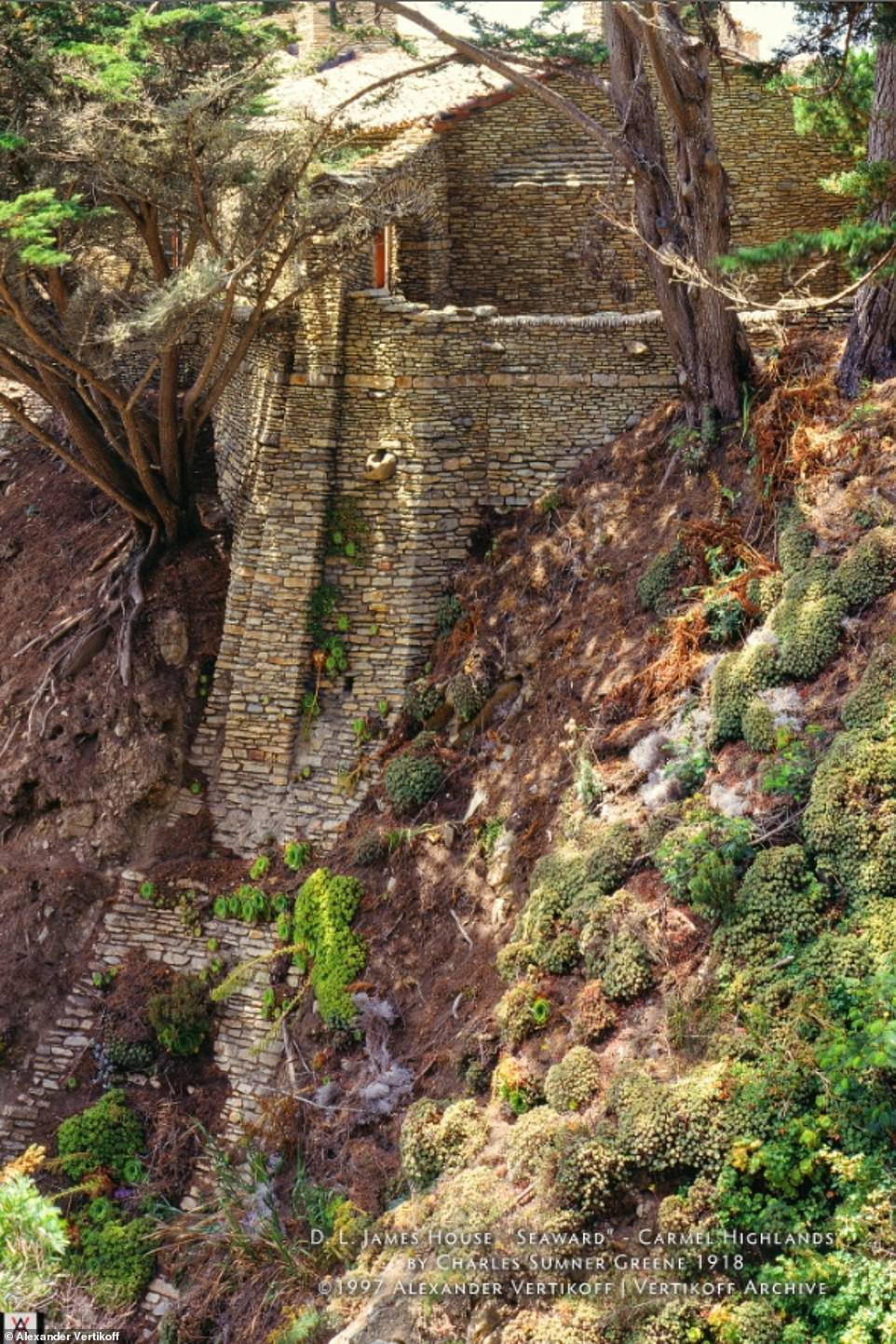 The design was intended to be in keeping with the rocky terrain, but some angles show just how close the $40million home is to the shore 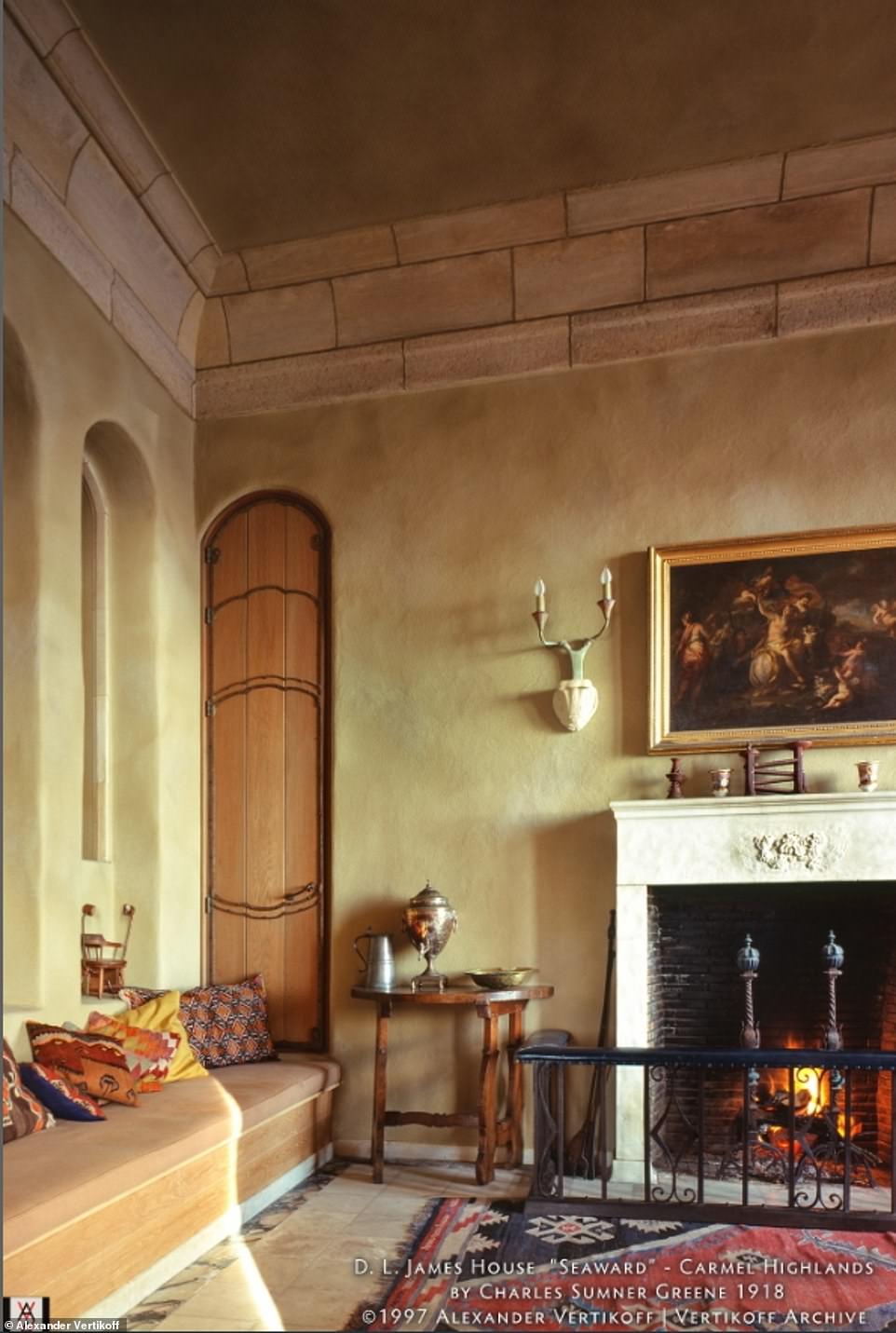 Intricate metal fireguards are also installed into the property, with a burnt red and orange theme adorning the interior of the home 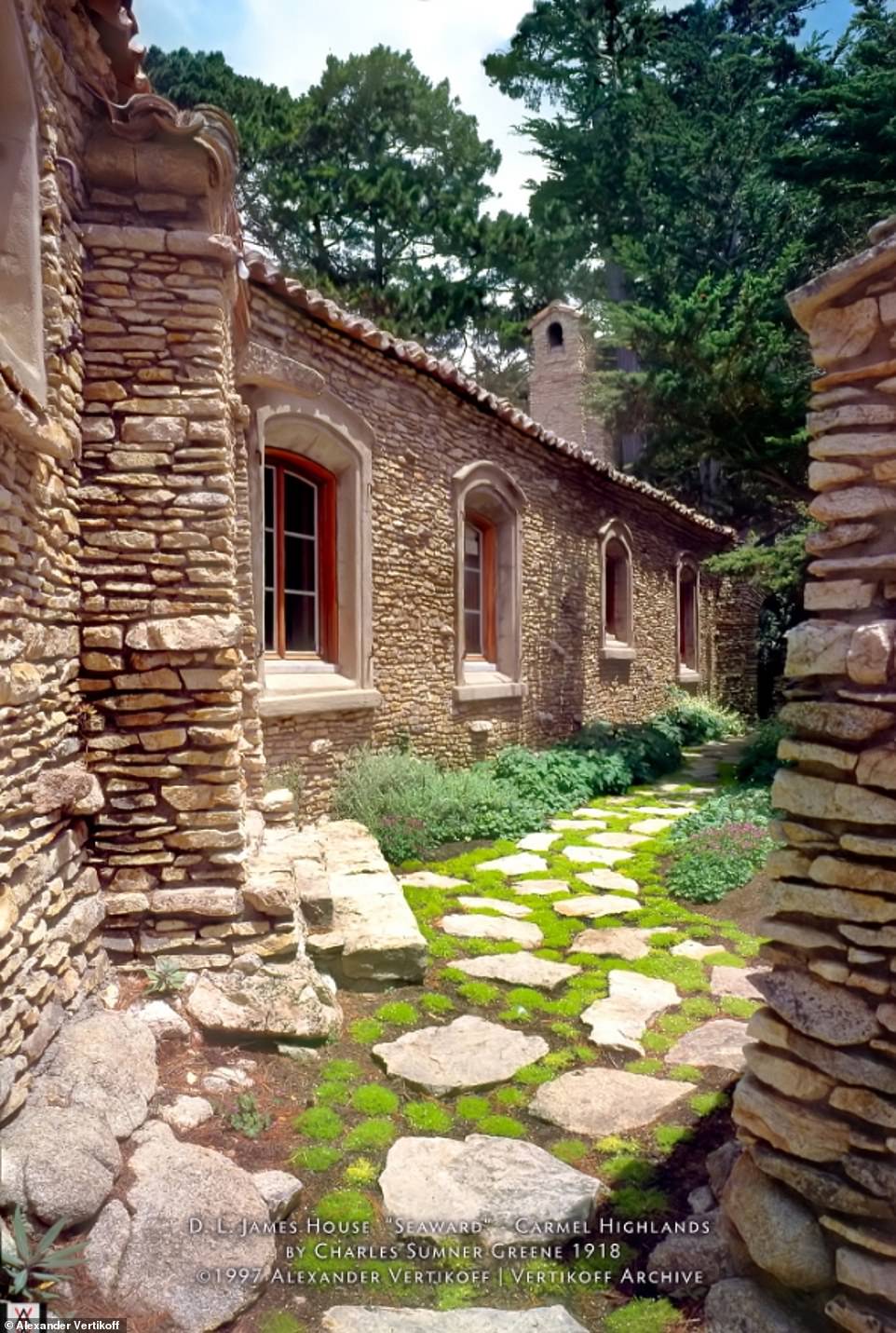 Each stone was reportedly hand picked by the architect, who even chose which stones would form a path outside of the property 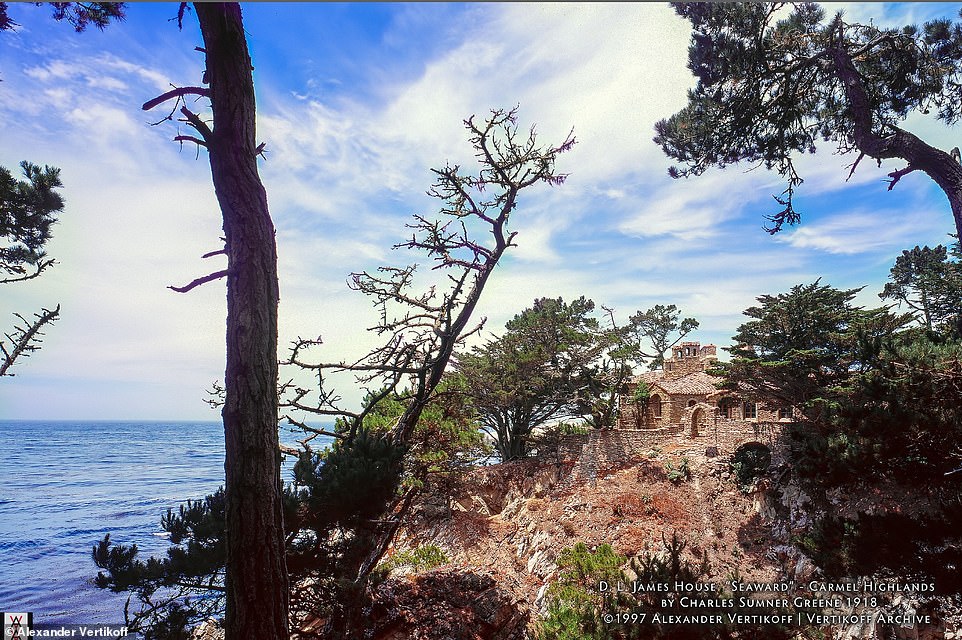 Brad Pitt will be joining dozens of other celebrities who have called Carmel-by-the-Sea their home, with Clint Eastwood even once becoming mayor of the small town

The home of Golden Girls actress Betty White recently sold for $10.775 million, well over its $7.95 million asking price in Carmel.

Legendary singer Doris Day, resided in Carmel until her death in 2019, in her yellow home which sits above Quail Golf Club’s 18th green.

She also purchased the iconic Cypress Inn and declared it as a ‘dog friendly’ hotel in the 1980s.

Academy Award winner Joan Fontaine lived in the Highlands for the majority of her life in her beautiful Villa Fontana.

A representative for Brad Pitt did not immediately respond to DailyMail.com’s request for comment.

In 1916, Charles Greene moved to Carmel-by-the-Sea, in part to enjoy greater creative freedom. Shortly thereafter, he met a client who was able to offer him a commission ideally suited to this pursuit.

Businessman and writer D. L. James owned a parcel of land on a bluff in the Carmel Highlands overlooking the water.

Charles produced watercolor sketches two days after viewing the site and spent the next four years personally supervising and designing every detail of the granite house (later called Seaward).

He built up the outer walls so that they appear to be growing out of the cliffs, and the meandering plan defied the logic of the usual front, side, and rear elevations. 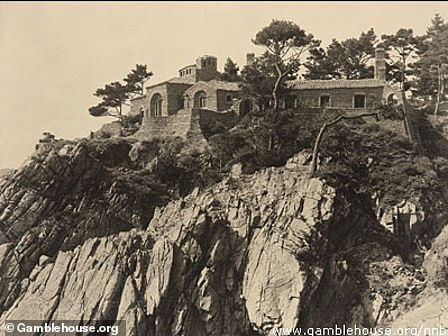 Greene’s architectural drawings combined floor plans with a variety of elevation drawings, showing that he thought of the house as a whole and never in sections.

Though early drawings show a small upper story, the house as built has all rooms arranged on a single floor, creating a continuity of interior spaces and vistas that rival the unimpeded views of the sea outside.

The wooden aesthetic of the Greenes’ Pasadena homes was replaced in the James house with locally quarried sandstone and granite.

Designs for its interior decoration reflected sensitivity to the surrounding plant and wildlife in the form of gulls, seaweed, and shells, though in the James house they are represented in carved marble rather than redwood.

A design for a built-in fall-front desk in white oak demonstrates Charles’ keen understanding of the most intimate details of construction, wooden or otherwise.

The house’s composition, arched windows, and tiled roof reflect a Mediterranean influence. Yet again Charles personalized the form, adding an archway opening just above a steep drop to the sea, reminiscent of a similar arch he had sketched when visiting Tintagel, along the coast of Cornwall, England, in 1909.